Keeping Greece on the Bus

For all the doomsayers predicting an imminent ‘Grexit’ from the Eurozone, the latest EU deal to ease their debt burden to 124% of GDP by 2020 should surely give pause for thought… at least on timing, if not necessarily on the eventuality.

In observing the interminable crisis response efforts of Europe’s leaders, it is easy to confuse a lack of haste for a lack of resolve or a lack of understanding.

Certainly, the process may be frustratingly slow. This is particularly the case for financial markets with ADD and journalists with deadlines and a need for a simple narrative. END_OF_DOCUMENT_TOKEN_TO_BE_REPLACED

Six months ago, I highlighted the increasing tendency of Irish banks, many of which are owned in whole or in part by the state, to hold on their books significant amounts of Irish government debt. Far from the ‘vicious circle’ between banks and sovereigns being broken, it is growing stronger than ever.

I noted then that in the 9 months to March 2012, Irish banks’ holdings of our national debt had increased by 40%, or more than  EUR 4bn, during which time the benchmark yield on Ireland’s sovereign debt fell from 14% to 6%.

In the intervening 6 months, the banks’ holdings have increased by a further  EUR 4.2bn (of which  EUR 3.1bn is accounted for by the financial chicanery that saw Bank of Ireland effectively lend money to the government so that they didn’t have to borrow it elsewhere) to  EUR 18.9bn, more than 10% of the total outstanding. 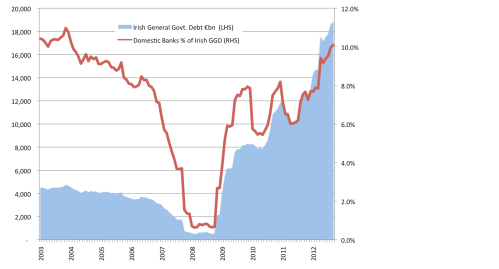