Much play has been made of the latest CSO data on property prices, which showed prices avoiding a fall in March for only the second month since  their peak in September 2007. Just as one swallow doesn’t make a summer, however, one month’s data doesn’t make a trend. 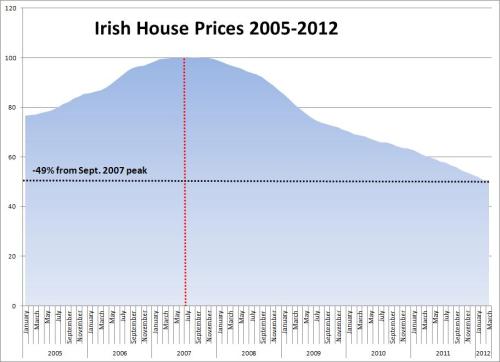 Overall, average house prices nationwide have fallen by49% since their peak according to the CSO, whose data is compiled on the basis of mortgage drawdowns. This likely understates the extent of the collapse in house prices, as it discounts cash transactions which have become increasingly important in recent years.

Flat prices in March must be viewed in the context of their accelerating decline through the Autumn and Winter. Moreover, there is clear divergence between Dublin and the rest of Ireland, the former seeing a 0.7% increase month-on-month while the latter saw a 0.6% drop. This may be explained by the fact that Dublin property saw the biggest appreciation up to 2007, and has since seen a greater correction (57% compared to 45% in the Rest of Ireland and 49% on average). Over-supply is also less of an issue in Dublin then elsewhere, in general.

There is no doubt that houses are more affordable now than they have been in years, when benchmarked against disposable incomes, rental yields etc., but there are two reasons why a robust recovery is unlikely in the near future: credit & confidence.

It is well known that the Irish banking system is undergoing massive deleveraging at the behest of the troika, but also because the banks’ loans are not backed by sufficient deposits. This process is certain to constrain credit supply for years to come.

More intangible is the ‘confidence fairy’. While credit may be in short supply, this is only a problem if demand for credit is significantly greater. Regardless of affordability, many prospective purchasers are clearly staying on the sidelines simply because they expect prices to fall further. If all buyers do the same, price falls become a self-fulfilling phenomenon divorced from economic fundamentals. This is what economists call ‘adaptive expectations’, i.e. people adapt and adjust their behaviour to everyday experience. Once asset price deflation has taken hold, the market will usually overshoot ‘true’ valuations.

Trying to call the bottom of the market may feel like trying to catch a falling knife, particularly if you are planning to put your money where your mouth is. When house prices do bottom out, however, and it is unlikley that they have yet reached their nadir, they are more likely to experience L-shaped stagnation than V-shaped recovery.