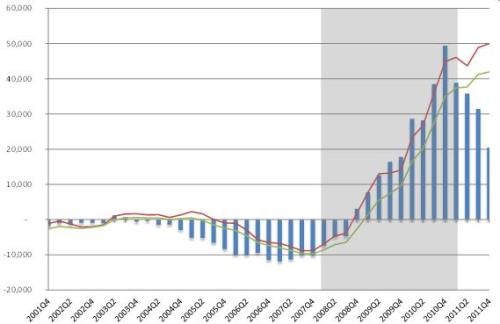 This graph is an extract from a term paper written by three co-authors and I for Professor Guillermo Calvo. We adapted Calvo’s own ‘Sudden Stop’ framework, and applied it to peripheral Europe.

Because the GIIPS are members of a monetary union, they experience some, but not all, of the effects typically associated with ‘Sudden Stops’. There is a large, if slower, adjustment in the Current Account as the capital needed to finance it dries up. Being members of monetary union, lacking monetary policy autonomy, inflation does not soar on the back of a currency devaluation, while the Real Exchange Rate adjustment – through ‘internal devaluation’ is consequently slower.

The flipside of monetary union is that official funding and fiscal stimulus mitigate the fall in capital inflows, slowing the Current Account adjustment. To isolate the fall in private sector inflows, we start with the following identity:

We solved for the Private Sector Balance to identify the movement of private capital:

Which can be expressed as:

Of the GIIPS, we found that Ireland was the first to experience a Sudden Stop – as early as Q1 2008 – after the financial crisis struck, and suffered the longest SS, 13 quarters until Q1 2011. We observe that, while private outflows temporarily abated in 2009 (although still experiencing a sudden stop), they regained force when the Greek program was agreed in the second quarter of 2010.

As Dornbusch & Werner (1994) pointed out: “It’s not the speed that kills you, it’s the Sudden Stop.” Capital flows do not necessarily have to reverse – i.e. turn negative – to precipitate a wrenching Current Account adjustment: a sharp slowdown can be enough. In Ireland’s case, however, there is evidence of significant flight of private capital from early 2008 onwards. Portugal was the only one of the GIIPS to escape negative private capital flows over the period under study. It experienced a Sudden Stop, and private capital inflows dried up completely, but they did not turn negative.

This entry was posted in Euro, Ireland. Bookmark the permalink.