ESRI: By Any Measure, Ireland is Still a Low Tax Nation

Alongside its latest Quarterly Economic Commentary, the ESRI today published its usual series of interesting research notes on the Irish economy.

In light of Ireland’s ongoing fiscal consolidation efforts, and the accompanying public debate, two of the notes are of particular interest (even if one could draw opposite conclusions from them):

Callan and Savage take a look at the OECD’s 2011 Revenue Statistics to compare where Ireland stands in terms of taxation as a share of national income compared to our EU-15 neighbours.

Recognizing the long-standing debate in Ireland over whether GDP or GNP is the appropriate benchmark for comparison (with Luxembourg, Ireland is something of an outlier in that GNP is a fifth less than GDP, whereas they are typically near equal), they present comparisons on the basis of GDP as well as GNP and the GDP/GNP hybrid measure recently formulated by the Irish Fiscal Advisory Council.

First, they present the league table for total taxes as a proportion of GDP: 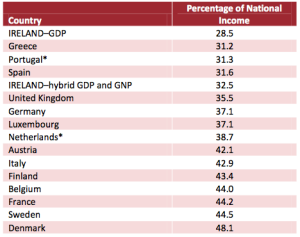 In 2011, Ireland had the lowest tax share as a proportion of GDP among the EU-15 at 28.5%. Taking into account the wide GDP-GNP differential in Ireland, the Irish Fiscal Advisory Council has recently argued that a hybrid measure – all of GNP plus 40% of the difference (or NFIA) – was a more appropriate benchmark. Their argument is that the large net factor flows which constitute the wide GDP-GNP differential are made up largely of multi-national profits which are a) taxed lightly in Ireland and b) not subject to policy change given the somewhat sacrosanct nature of the 12.5% corporation tax rate in many policymaking circles (of course, one might argue that such policy paralysis is irrelevant, that the corporation tax rate can at least theoretically be increased, that this would have a knock-on effect on net factor flows, and that raw GDP data is the appropriate benchmark for international comparison). However, even using this hybrid measure Ireland is still the 4th lowest taxed EU-15 member, equal to the UK but ahead of Greece, Portugal and Spain.

Next, the authors focus on taxes on individual income (including social security contributions like PRSI, but excluding corporation taxes).

For this purpose, it is appropriate to exclude net factor flows – which are not for the most part subject to such taxation – and therefore use GNP alone as the appropriate benchmark.

Again, Ireland is the lowest taxed country on the basis of share of GDP comparisons, and 4th lowest in the case of the alternative measure (in this case, unadulterated GNP). On the basis of the GDP measure, personal taxation in Ireland is exactly half the level of Denmark. Using the GNP measure, personal taxation is a little higher than in the UK, but still significantly below the EU-15 average and only 63% of the level in Denmark.

The authors conclude that it is absolutely fair to describe Ireland as still being a low tax economy. Rather than considering Ireland to be far and away the lowest taxed of the EU-15 members, it may be more appropriate to consider the country as being part of the BBB group – not those with an investment grade rating, but ‘Bailout Bosom Buddies’, namely Portugal, Ireland, Greece and Spain.

One can perhaps understand the frustration of those doing the bailing out, given that they have higher tax levels not only to support their own welfare states, but those of the PIGS / GIPS / BBBs also.

Interestingly, in the second research note mentioned above, John Fitzgerald et al compare the macroeconomic impact of raising taxes through income taxes, carbon taxes, or a lump some tax like the household charge.

As the table shows, they found that raising revenue through carbon taxes is far less detrimental to the economy than raising a similar amount through income taxes (with the household somewhere in between).

Given that carbon taxes impact on firms more than families or individuals, they find that they have a smaller impact on personal income than income taxes or the household charge. Unsurprisingly, the also find that carbon taxes carry greater environmental benefits in terms of reducing energy usage and carbon emissions.

The authors suggest that increasing carbon taxes to offset reduced income taxes could entail an economic and environmental ‘double dividend’, spurring greener growth. The scope for action here is tempered, however, both by Ireland’s current fiscal constraints, and by the potential negative impact on competitiveness if carbon taxes were increased to a level much greater than in neighboring countries.