Since the blanket bank guarantee was introduced in September 2008, the Irish banks’ holdings of Irish sovereign debt have soared from a mere half billion euro to €14.6bn, or about 12% of total govt. debt.

In the 9 months since July 2011 alone, Irish banks’ holdings of our national debt have increased by 40%, or more than €4bn. Interestingly, the yield on benchmark 10 year Irish sovereign debt has fallen from over 14% then to just over 6% now. This is prima facie evidence of an increasing tendency towards financial repression in recent months. 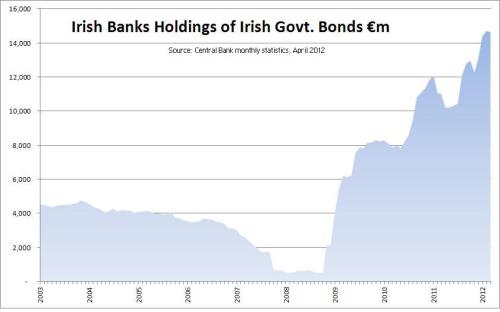 Given that Irish resident holdings of our govt. debt has been trending downwards, one could conclude that the largely govt. owned banking sector has been snapping up govt. debt, just not not as quickly as the rest of the Irish private sector, including pension funds, has been offloading it.

Is there a false floor under Irish bond prices, and a consequent ceiling on yields?

One response to “This is What Financial Repression Looks Like”