Are Wages Adjusting on Europe’s Periphery?

Countries in economic crisis typically try to make their exports more competitive by devaluing their currencies. This option isn’t open to members of a monetary union (or those with a currency peg, like Latvia & Lithuania).

Hard-hit peripheral members of the Eurozone have been pursuing an ‘internal devaluation’ strategy, targeting an improvement in the all-important Real Exchange Rate by allowing nominal wages and prices to adjust. The graph below shows the extent to which labour costs have adjusted on Europe’s periphery since 2008, compared to Germany and the EU average.

We see that, on average, labour costs across the EU 27 have continued growing at roughly the same rate between 2004 and 2012, although this average conceals deep differences across the Union.

Ireland and the Baltics, which had experienced the steepest increases in unit labour costs before 2008, saw the most dramatic readjustment since the crisis struck. In fact, only Latvia has seen a bigger adjustment in unit labour costs than Ireland. Ireland is, depending on your perspective, top or bottom of the Eurozone pile. One could attribute this to the fact that these countries posess suffered the most dramatic contractions in output, and have the most flexible labour markets.

German labour costs had been trending downwards before the crisis – going against the grain – but, despite a dipping in 2010, have since been growing. They have increased by more than all of the peripheral countries (PIIGS & Baltics), and have outstripped the EU average. Thus, based on labour costs alone, Germany has since 2008 become less cost competitive vis-a-vis its EU neighbours, and compared to the peripheral countries save Italy in particular.

Only Greece and Portugal are expected by Eurostat to have lower unit labour costs in 2013 than in 2011. Ireland and Latvia are expected to be broadly flat over this period, while  all other countries, and the EU average, are expected to trend upwards.

In the graph below, we can see clearly the divergent experience of unemployment between Germany and the periphery over the 2006-2011 period. 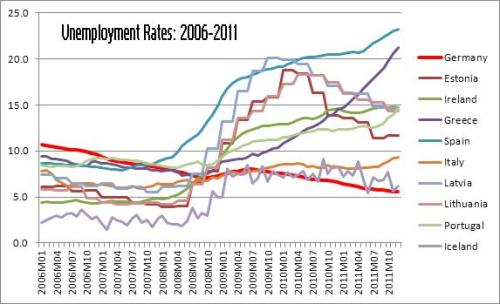 This entry was posted in Euro, Ireland. Bookmark the permalink.